“Always be yourself. Unless you can be Batman.
Then, always be Batman” – Unknown

I became a father two days later, but only because Frederick Peter King took 40 hours to make an appearance. This is nearly as long as it now takes him and his brother to leave the house.  Presumably, he just had to find his shoes, finish whatever it was he was making out of Lego, decide what he NEEDS to take with him, and argue about whether it is a good idea to wear a snowman jumper in 20°C sunshine before leaving, or whatever the in utero equivalents are.

Overall, Freddie’s arrival, and the arrival of Caspar 2½ years later, were the best things that could ever have happened to me. But they were not a solution to any of the issues that I had been dealing with my whole life (children rarely are), and in many ways exacerbated my symptoms, stopped me from getting help (when I finally saw my GP she diagnosed it as “baby blues”) and put me on the downward spiral to the breakdown.

Before I go any further, I want to make two things clear.  Firstly, I was not the one that had to go through the nearly two days of pain and terror that was Freddie’s labour, and I know for sure that any ultra-marathon I sign up to in the future will be nothing compared to that, even if it lasts as long.

Secondly, I recognise how incredibly lucky I am to have a child, let alone two healthy (most of the time), beautiful, happy (most of the time), loving and wonderfully weird boys.  This has been thrown into sharp focus in the last year through the experiences of four people that are very close to me, including one of my Mont Blanc running partners. James’s story is his own to tell, but I can’t talk about the subject without asking you to follow this link, and donate to another incredibly important cause http://bit.ly/1Sna5C8.

Back to my own story. It seems to me that there are two types of parent, the ones that find parenting hard, and convincing liars.  The worry, bewilderment, exhaustion and sheer repetitive drudgery that comes with having a child can at times overcome even the most patient, rational and well-supported parents.

For me it was much more than this though, and I know that I’m not alone.  I’ve already described how spectacularly badly I handled the news of Camilla being in the family way (http://bit.ly/1IT153l), and how I felt completely unprepared to look after another human being.  As the due date approached, the pressure became greater, and I became consumed by more worrying thoughts.

One of the most frequently used words in therapy to describe myself was (and in many ways still is) “fraud”.  Ever since I was a teenager I’ve been convinced that one day I would be found out; exposed for the feeble, weak-minded weirdo that I am; that my ability to conduct a normal life was just a flimsy facade.

As a father, the consequences of my true identity being unmasked were exponentially increased, and I lost my only escape route.  Without wishing to sound self-pitying, before Freddie came along I felt that I could always disappear, whether temporarily or permanently, if it all got too much, or if my deception was exposed.  Although my family and friends would obviously be very sad, they would, in time, get on with their lives, and Camilla would find someone that wasn’t punching so much above his weight.  Perhaps this is the reason why so many people with depression feel the urge to distance themselves from those close to them, and why it is so important to spot the signs of this as early as possible. The further the gap, the harder it is to come back.

When Fred arrived, there was someone in my life that couldn’t replace me, that would depend on me for love, support, money, and as someone to look up to. As will now be clear, I felt completely unqualified for this role.

I also started experiencing unsettling bouts of manic obsession, and became even more convinced that something would go wrong.  As a baby, Freddie had a number of issues that disturbed his sleep, the worst of which being the idiot who woke him up every time he was still, to make sure that he was still breathing.  I also spent a whole week cleaning and disinfecting every wall, floor, fixture, fitting and moveable object in the house.  Camilla had to force me to stop in the end, persuading me that it would be a few years before Freddie would start reading my pretentious collection of Penguin Classics.

What was most difficult to deal with was the all-consuming fear that Freddie would turn out like me. Although he is definitely very sensitive, single-minded to the point of obsession and prone to pretty extreme mood swings, even for a five year old, things will be different for him for two reasons. Firstly, even if he does suffer from mental health issues, he’s got me and Camilla, who are now more experienced than we would ever want to be in dealing with the highs and lows of bipolar depression, and perhaps I can be a role model by showing him how depression can be controlled much of the time, and that it is ok to seek help when it can’t.

Secondly, and most importantly, he is also more self-assured than I will ever be, as demonstrated by the exchange I had with him around 18 months ago:

FPK: “Daddy, you know that man?” [Points at his kid’s encyclopaedia]
UDR: “That’s Usain Bolt, Freddie”
FPK: “Is he really the fastest man ever?”
UDR: “Yes he is.” [Natural pedant that I am I wanted to say “fastest recorded man, over 100 and 200m”, but I was late for work and couldn’t spend the next hour giving him the history of running (that will come later)]
FPK: “He’s not faster than me though is he?”
UDR: “He’s the fastest man in the world, which means that no-one is faster than him, even you.”
FPK: “Yeah, but if I was on my scooter, wearing my Batman costume there is NO WAY that he would beat me.”

And that, ladies and gentlemen, is my eldest son in one conversation. If I can be a part of creating someone like Freddie, with so much confidence in his athletic ability that he calls out the world’s greatest sprinter, then maybe I’m not that bad after all. 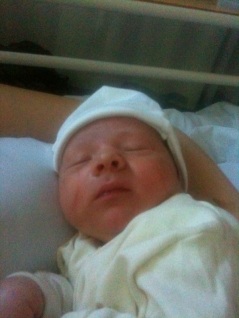 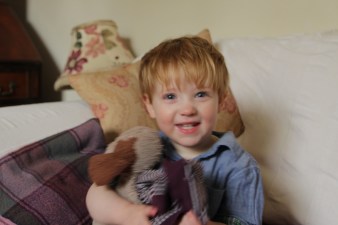 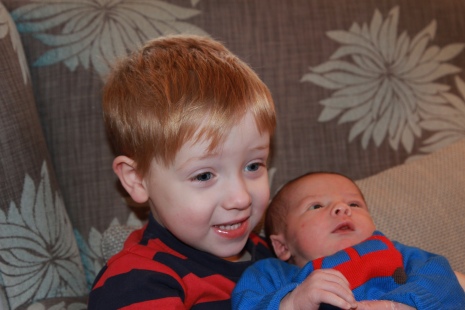 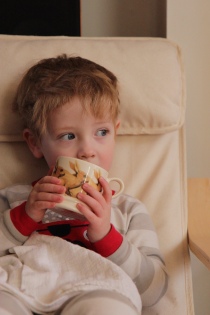 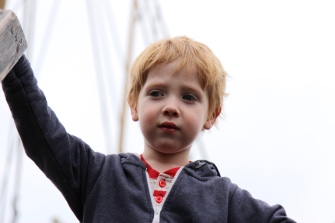 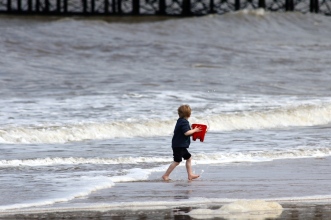 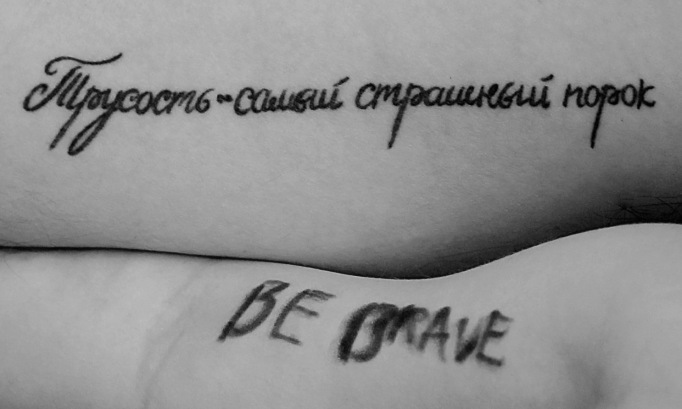 I would love to say that running has always been part of my life, that I was a junior cross-country champion, or did my first marathon at 16, but actually that could not be further from the truth. I really only discovered running as a sporting activity in my 20th year, because, to be honest, it was the only sport that my supreme lack of co-ordination was not too much of an impediment to, although my action has been described as “chicken-like”.  Even then, the first time I could honestly call myself “a runner” was when I was 29, after completing my second ever race, the 2009 Great North Run. In fact, I can even pinpoint the exact moment I became a runner. It was just under a mile from the gloriously sunny finish, after a laboured couple of miles, that I spotted him – a guy, no older than myself, watching the race with his little boy. I probably should have said earlier, but four weeks before race day I found out that I was going to be a father.  It’s fair to say that to that point I had not handled the news very well, in that I did not speak at all for four days after I found out.  It was not that I was disappointed or upset by the news, just that I could not see how I could ever look after another person. I would love to say that it was at this point that I realised that it was the best thing that could have happened to me, and that I sprinted to the finish as if on air, sure in the knowledge that I would make a great father.  However, this could not be further from the truth. What actually happened was that I stopped, and did everything I could not to throw up on the course, and/or curl up in a ball and cry. When the worst of the nausea passed I started running again, and the further I went, the better I felt, so much so that when I got to the finish line, I felt the way I should have done when I first got the news. Except of course for the sweating. From that point I was hooked, and since then I have completed 8 half, 3 full and 1 ultra marathon, as well as a 20 mile race and numerous 5 and 10kms.  This may not sound like a lot, but with a wedding, two children, two house moves, a breakdown and countless injuries (more on which later), it has certainly felt like a lot. When someone asks me why I run, I generally have a list of things that I love about the sport: the simplicity (although to be honest this isn’t that much of a driver for me as I have pretty much every running gadget there is); the way it lets me explore new places and improve my terrible sense of direction; the fact that if you stick at it you continue to make progress; being able to eat extra guilt-free calories; because it is the only time that I am left alone; to acquire Marukami’s runner’s void; the stats; the competition and the  fact that I do not have to rely on Southern Rail to get into the office.  But really, the main reason for me is that it allows me to run away from the person that I am, and towards the person I would rather be. As I mentioned above, and no doubt will do again, I have always been a cowardly person, shying away from confrontation and being paralysed by the fear of failure, and to an extent that is still the case.  What running has taught me is that it is possible to fight my natural urges, ignore the dominant negative side of my personality, and that I am capable of doing things that I feel I am not built for. The quote at the start of this post is from one of my favourite books, but this exchange only properly clicked with me after I had read Murakami on running mantras (What I Talk About When I Talk About Running, one of the best books about the love of running).  I tried out a few phrases, but the one that stuck, and the one that I now try to use every time I face something difficult, is “cowardice is the most terrible vice”.  It has become so much of a part of my life, that I have had it tattooed on my arm, in Russian for extra pretentiousness.  Mine is the slightly less puny of the arms pictured above, the other arm is my eldest son’s, who made mummy write a less poncy version on his arm (in felt tip, we have not given our four year old a tattoo), to be like daddy. Running CV:

Like many addicts, I am now itching to try the hard stuff – mountain and ultra running, starting with the Mont Blanc Marathon at the end of June, and then to the Cappadocia Ultra Trail 60k in October.